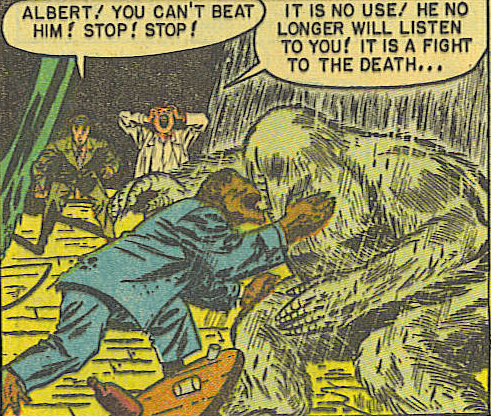 Most stories starring The Heap tend to fall under two categories: 1. He’s a rampaging monster causing terror throughout the land; or 2. He’s an elemental force for justice causing terror in the hearts of evildoers.

There are a few elements common to each tale, however. One, obviously, is “terror.” (The Heap is a shambling muck-monster after all …) The other is that many of the creature’s adventures are somehow tied to his former identity as a German World War I flying ace.

The following story straddles just about every category as The Heap avenges an insult to his honor as a former pilot, teaches some shady characters a lesson about respect and picks a fight with a natilly dressed ape to boot. Along the way, there’s the requisite amount of collateral damage and terror.

All in a day’s work for comics’ original Swamp Man-Thing!

“The End Of The World Cafe” originally appeared in Airboy Comics Vol. 5 #9 (Hillman Periodicals, Oct. 1948). The art is by Mike Roy And John Belfi. 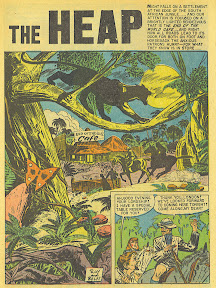 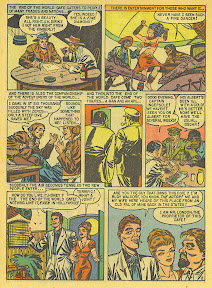 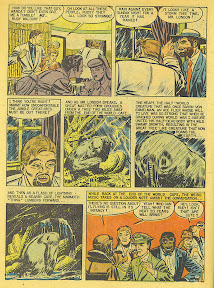 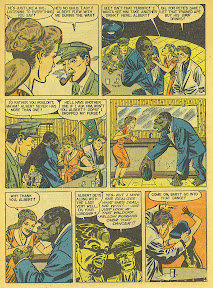 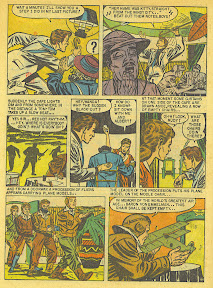 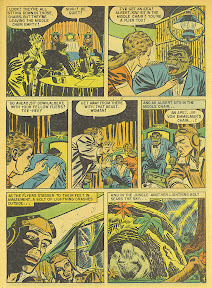 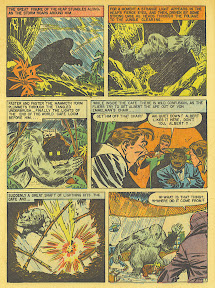 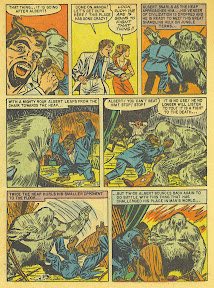 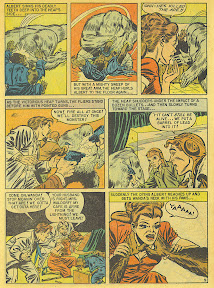 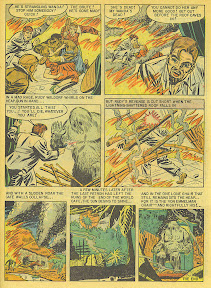 I actually feel sorry for Albert the Ape …

The Heap faces off against a criminal mastermind who – judging by the way our muck-encrusted anti-hero outmaneuvers her at the story’s conclusion – isn’t half as smart as she thinks.

While the villainess doesn’t exactly earn herself a spot in the Golden Age Bad Girl Hall Of Fame, the story does boast an outstanding pair of artists: Carmine Infantino on pencils and Leonard Starr on inks.

Infantino would go on, of course, to play a major role in Silver Age revival of super-heroes and rise to the rank of publisher at DC. Starr, for his part, would achieve great success as a syndicated cartoonist who contributed to such legendary strips as Flash Gordon and Little Orphan Annie as well as his own creation: Mary Perkins.

Starr also deserves a special place in every geek’s heart for developing the legendary Thundercats cartoon of the ‘80s!

Not too shabby, as Adam Sandler would say.

(Ummm … tell me I didn’t just quote Adam Sandler. I know I was getting a bit desperate about writing a proper transition to the comic’s original publication credits, but really.)

Oh well. Guess they all can’t be winners.

The creature’s origin was simple, but evocative. A German air ace is shot down in World War I and crashes into a desolate swamp. Due to the pilot’s incredible will to live, his soul survives but his body somehow merges with the surrounding swamp land.

After several years of this process, the pilot is reborn as “a fantastic Heap that is neither animal nor man.”

The creature was blown up at the end of the adventure, but proved popular enough for several return engagements that solidified The Heap’s anti-hero status. (It helped that it’s victims were usually German or Japanese soldiers …)

After World War II ended and Air Fighters Comics morphed into Airboy Comics, named after the magazine’s most popular character, The Heap stuck around in its own back-up feature recast as an elemental force of justice acting under the guidance of Mother Nature herself.

As horror comics gained popularity, The Heap even snagged the cover spot away from Airboy himself a few times. The faltering comic-book market finally overcame the creature’s will to live, however, as Hillman closed up shop after Airboy’s May, 1953 issue. Still, it’s difficult to keep a good monster down as updated versions of The Heap reappeared from time to time under the banner of such publishers as Skywald, Image and Eclipse.

To paraphrase a golden oldie, though, those particular muck monsters weren’t nothin’ like the real thing. From Airboy Comics vol. 2, #7, Hillman Periodicals (August, 1949), here’s the one, true Heap vs. the bizarre menace of “The Iron Chancellor.”

The art is by Mike Sekowsky.

The majority of the comic-book scans posted on The Time Bullet are courtesy of the Digital Comics Museum. Thanks to the many contributors to that site who help keep comic-book history alive and well!